The sun was setting and a nice, cool breeze lightly wafted the scent of garden blooms. We had arrived just in time to get settled in before the Shakespearian comedy began. An elegantly scrolled larger-than-life black metal gate stood in the center of the stage against a twilight backdrop of sky. A magnificent prop that turned out to be one of only a couple. I’m not sure I’d ever been to an outdoor play before and almost immediately wished I had brought along a light blanket. Well-costumed ladies took stage and began the opening scene in song, a pleasant blend of altos and sopranos in almost perfect harmony. Several hours later, having survived an intermission and continuously fast-paced witty banter, the show had concluded. It was not the best modern delivery of an Elizabethan play that I’ve experienced. In fact, it was a bit dry at times and seemingly more serious than it needed to be. It was supposed to be one of Shakespeare’s funniest plays. My favorite parts were the dance scenes. I will definitely praise their choreography; it was detailed and authentic to the time period. I’ve watched instructional dance videos and tried to learn baroque, renaissance, and medieval dance. It’s not as easy as you’d think. Some of those dances require very fancy footwork.

At any rate, the show was over. We had abided by an announcement right before the show began to refrain from taking photos. I always assume this is to prevent distracting and annoying flashes while the actors are trying to work on stage and even though I don’t use a flash in those types of settings I complied. So, imagine my surprise when we attempt to take a photo AFTER the show had ended, the man sitting behind us tells us to delete our photos. And then goes to get another employee of the theatre who comes over and gives us a hard time. The man sitting behind us knew we had not attempted taking photos during the show and must’ve been aware the show had ended because half of the outdoor theatre had already emptied. To make matters worse, I had forgotten to put a memory card in the camera in the first place. Before we left the house I had been trying to clear up the memory cards to make space. I honestly thought the guy might try to take my camera, citing how illegal it is to take photos and the play is copyrighted. I was honestly humiliated, made to feel like a criminal. This is definitely not the first time I’ve been asked to stop taking photos (Miami, Ireland, Italy, etc.) but never ever has someone tried to stand over me and force me to delete photographs. My favorite was the Sistine Chapel. How on earth are you supposed to visit the Sistine Chapel and not take photos. Well, it was because they wanted you to buy their own photos when you exited through the gift shop.

This has bothered me all day so I’ve been doing some research. Considering Shakespeare never published his plays for fear of the works being copied without his permission and copyright laws did not exist in his time… how is this play copyrighted? I could find nothing showing that it is. What seems more likely is that the theatre may want copyright of any photos taken of their performance of the show and in that case it may be illegal to try to publish or sell any photos you take of the actors but not actually illegal to take the photos. In fact I saw no signs posted that indicated photography was not allowed, and there was nothing mentioned on the tickets. If these men had actually forced me to delete my photos they were likely intruding on my photographer rights according to everything I have read. The exception is military and government facilities and installations and private residences or property in cases where you are trespassing. If you are in a public facility, especially in a public park, more than likely photography is NOT ILLEGAL. Some zoos including the San Diego Zoo make it clear that taking photos is ok but it is illegal to profit from any photos taken there.

And this is what the big ado was about: 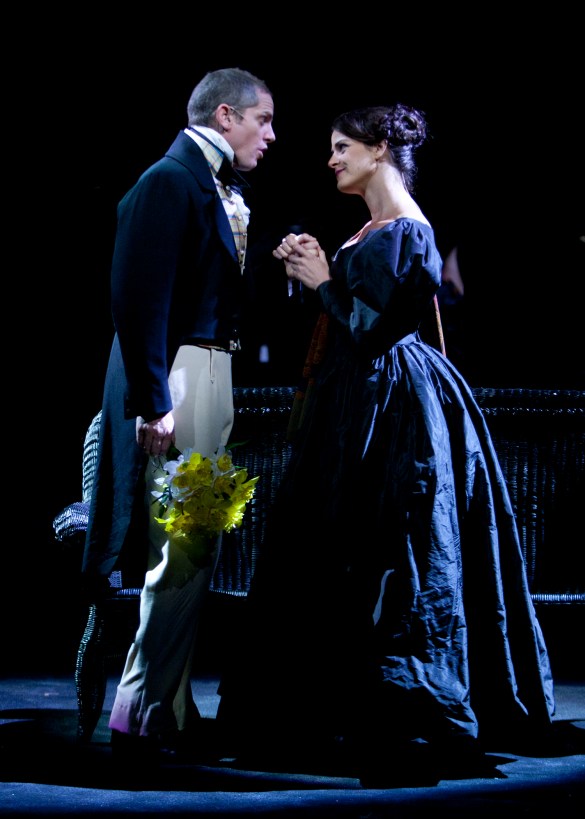 A photograph. One of many in the online gallery of the theatre’s website, available for free public download in web or full resolution, your choice. Photo credit goes to: Henry DiRocco. I had mostly enjoyed this mediocre rendition of a play until we were harassed for unsuccessfully trying to take a photo after it had ended. I’m going to continue to arm myself with the knowledge of a photographer’s legal rights, you should too.